Home News Corporate dairies to have an edge over co-operatives As the Indian dairy market is set to grow at a 7 per cent compounded rate through 2016 to 2021 driven by growing demand for branded and value added products, the sector is likely to see more action from private dairies, especially in the area of procurement and new product launches. In fact, private dairies like Parag, Hatsun, Kwality, who have seen significant net profit growth in the last few years, feel that with focus on value added products, it is an imperative to source directly from the farmer and not contractors.

As an India Infoline report titled “Dairy Industry-Utterly Butterly Prospects” points out, the profit after tax (PAT) growth for players like Hatsun Agro, Heritage Foods, Kwality Dairy, Parag Milk Foods and Prabhat Dairy between FY12 to FY16 has been 22.8 per cent, 56.1 per cent, 17.1 per cent, 25.8 per cent and 26.7 per cent respectively. This is because all these players have moved away from commodity trade and have focussed their energies on value added products.

As Nawal Sharma, President & Head-Business Transformation, Kwality Ltd explained: “The margins for the commodity (skimmed milk powder etc) is around 4.5-5 per cent (at an Ebitda level), while for fresh products it is around 9.5-10 per cent and for value added products this goes up to over 20 per cent. We have thus decided to make a strategic shift towards focussing on value-added products and improve our bottomline.”

India Infoline explained, the high rate of growth and increasing preference for branded products is what is drawing players like Mahindra & Mahindra (M&M), ITC and others. M&M has launched liquid poly-pouch milk with 44% higher cream content and is enriched with Vitamin A & D. FMCG major ITC, on the other hand, has forayed into dairy with AashirvaadSvasti pure cow ghee. Godrej Agrovet raised its stake from 10% to 25% in Creamline Dairy for Rs 150 crore. Meanwhile, Danone, Nestle and other existing private sector players are adding to their product line-ups and pushing in big money into the market while home-grown dairy cooperatives such as Mother Dairy and Nandini, among others, are also expanding their operations rapidly. 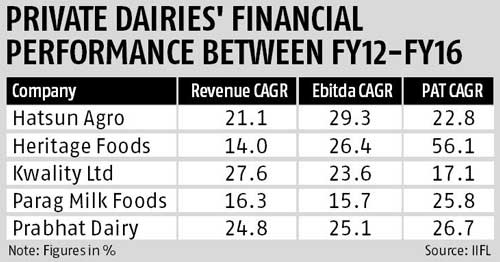 It also predicts in its report that in the coming years, private sector is likely to procure more milk from farmers than cooperatives. Ruchita Maheshwari, analyst with India Infoline pointed out that there has already been a 20-30 per cent rise in direct procurement from farmers by private dairies rather sourcing from contractors.

Sharma explains, “To process value added products one needs to procure directly as there is a difference in the way milk is procured and chilled by contractors. This is encouraging private dairies to develop well defined farmer-connect programmes.” Kwality, on its part, plans to raise its direct farmer sourcing from a current 22 per cent of its overall volumes to about 50 per cent of its volumes in the next three to four years.

Maheshwari informed that players like Parag already source 100 per cent of their milk directly from farmers. As such around 70 per cent of the country’s milk production is handled in the unorganised sector, remaining is shared equally by cooperative and private dairies.

IIFL said: “Out of the 400 mn litres of milk that India produces per day, 160 mnlpd (48%) is retained by the producers for their own consumption. The surplus milk that is available for sale is around 240 mnlpd (52%) and out of that only 70 mnlpd is being used by the organised sector. Over 170 million litres of the surplus milk continues to be with the unorganised sector, comprising traditional doodhwalas. In value terms, the Indian milk economy is worth Rs 5 lakh crore, growing at a CAGR of 15-16%, out of which the organised milk economy is worth Rs 80,000 crore.”

According to Maheshwari, the share of the organised sector has been rising steadily; from 16-17 per cent in 2010 it now accounts for nearly 30 per cent of the overall milk production. Currently the Gujarat Cooperative Milk Marketing Federation (GCMMF) which owns the Amul brand and Karnataka Co-operative Milk Producer’s Federation Ltd (KMF) that owns the Nandini brand together handle almost 50 per cent of the country’s milk, however, the share of regional players is rising steadily, claim industry insiders. More than 200 liters of bad milk thrown in gutters by...

The food business – A state-run enterprise milks its dairies for...