The Special Operations Team of Cyberabad police on Thursday raided an adulterated ghee manufacturing unit located at Balanagar and arrested one person. Over 30 such units are allegedly functioning across Cyberabad.

On credible information, a team of Cyberabad police raided the ghee manufacturing unit being run in a residential colony in Gandamma Street at Bala Nagar. The police found that one Rajesh, owner of the unit, was adulterating ghee by mixing edible oil and dalda to lessen the quantity of original ghee.

The police seized 300 kgs of ghee and handed over the accused to the Balanagar police. Preliminary investigations revealed that the Rajesh was selling the ghee to roadside vendors claiming that it was homemade.

The police said so far the teams had identified 20 such units on the outskirts of Cyberabad and arrested all the accused. The police said they would zero in on such adulterating units which could lead to severe ailments to the consumers. Consumption of adulterated ghee leads to respiratory and other health problems and also affects the functioning of liver. 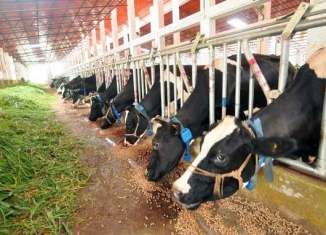 Dec 26, 2015
0 12
Source: timesofindia.indiatimes.com At the age of 72, retired medical practitioner Dr Subah Masih is enjoying second innings of life by running a dairy farm with monthly...

OMFED TO COLLECT 10LAKH LITRE OF MILK A DAY